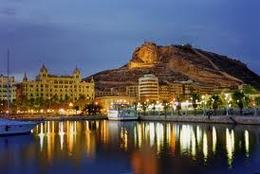 Alicante is the gateway to the Costa Blanca's popular holiday resorts such as Benidorm. A busy port, it offers the best of both worlds - classic Spanish heritage and modern culture. Today's visitors will find plenty to keep them occupied - from golden beaches and lush parks to designer shops and street markets. Add a mountain-top castle, beautiful churches and palaces and a charming old quarter and it all makes for an alluring taste of typical Spain. 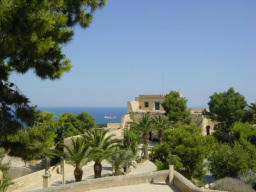 Castillo de Santa Barbara located on the summit of Mount Benacantil, overlooking the city and the Mediterranean Sea and boasting fantastic panoramic views, is the Castillo de Santa Barbara. With its high walls and domed turrets, it is home to many features, including the keep Torre de Homenaje, the Englishmen's bastion and theroom of Felipe II. The castle also features a marvellous garden, stone passages, hidden passages and drawbridges.
Opening Hours: Tue-Sat 10am-2pm & 4pm-8pm (summer 5pm-8pm); Sun 10am-3pm. Open daily apart from Mondays.
Directions: The castle, located at the summit of Mount Benacantil, is accessed by car, up the winding road from the old quarter or if you are on foot, by taking the lift from the road behind the Playa del Postiguet beach. 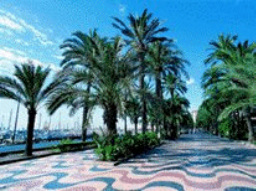 Paseo Explanada de Espana with four rows of palm trees set down in gardens that run almost half a kilometer, is the most emblematic and impressive promenade in Alicante. The pavement consists of an enormous mosaic of 6,600,000 tiles of tri-coloured marble and its geometric shapes reflect those in the harbour square. Marking the eastern end is a monumental fountain designed by Carlos Buigas in 1960. 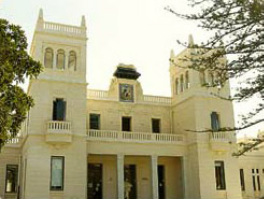 Museo de la Asegurada located in the Old Quarter and originally used as a prison and munitions store, it was chosen to host a collection of contemporary art donated by Eusebio Sempere. It is also home to the most important examples of 20th Century Art, comprising of paintings, sculptures, mixed technique and lithographs by artists such as Picasso, Dali, Miro', Gris, Kandinsky, Chagall and lesser-known Spanish painters. 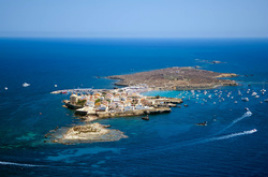 Isla de Tabarca a guitar-shaped island located eleven miles south of Alicante, on the prolongation of the cape of Santa Pola, is the largest and the only inhabited island of the Comunidad Valenciana. Completely flat, 1,800m long and 450m at its widest point, was once a refuge for Berber pirates who raided the coastal villages. It is now perfect for a day trip, where a medieval fort, a walled precint and a fortified village can be found, alongside a pleasant little beach and fine seafood restaurants. 30 minutes by ferry from Santa Pola. 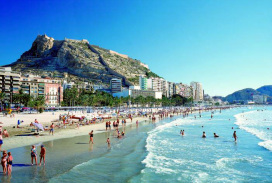 Las Playas (beaches) Alicante's pride are the beautiful beaches, amongst which are La Playa De San Juan, La Albuferetaand La Playa del Postiguet.  La Playa de San Juan is a 7km open beach of golden sand and is considered to be the finest in Spain; La Albufereta is a secluded and intimate beach and La Playa del Postiguet is an urban beach with an attractive promenade and flanked by palms. With their fine golden sands and high levels of cleanliness, year after year, they are awarded the Blue Flag of the European Union, the maximum guarantee of their consistent quality.